Enabling staff to accurately identify undefined problems ahead of time and the cause of defined problems allows plants to operate much more reliably and efficiently, says Precognize’s Chen Linchevski. OEM independent SAM GUARD can be easily applied to all process industry facilities, he stresses.

SAM GUARD IN A NUTSHELL

SAM GUARD enables you to

Time prior to failure (based on historical events)

Number of tags per plant supported by the solution

Problems in process plants can be loosely categorized into two main types: predefined or repeating problems, and undefined or non-repeating ones. While both types cause loss of income and unnecessary outlay, undefined problems have a far greater impact on revenue and productivity.

Let’s look at how each type fits into the rubric of predictive analytics, and how Precognize’s SAM GUARD can predict and prevent both types of problems, generating clear return on investment. Our core competence is in identifying and solving the undefined, non-repeating problems, however SAM GUARD of course also has a solution for the defined problems, which are actually much easier to deal with.

Defined problems
Predefined, repeating problems are when the problem is known. It’s something that has happened before and repeats fairly often. Repeating problems are common around process improvement, like aiming to maintain the golden batch. Engineers can use Precognize’s SANDBOX to find out which tags are relevant for that problem, to spot the causes of the problem and find the parameters and monitor them if relevant. The SANDBOX can connect between seemingly unrelated parameters, identifying the root cause. A bigger challenge lies in alerting plant engineers to non-repeating, undefined problems that arise Predicting defined and undefined problems in process plants seemingly out of nowhere, because there’s no historical data to prepare you for such events.
Undefined, non-repeating problems
Undefined problems are ones that do not repeat themselves, like most cases in the process industry. In these cases, the issue never occurs in the same place or in the same way twice, making it unexpected. Examples of undefined problems include equipment failures, small process deviations, and changes to the operating process because of equipment failure, malfunction, or abnormality. In process plants, non-repeating problems occur more often than repeating problems, but they remain harder for most solutions to predict and analyze. Here are several examples of non-repeating problems, and how SAM GUARD identified them and created new value for the plants:
Petrochemical example: partial blockage in heat exchanger
At a petrochemical plant, SAM GUARD alerted due to substantial differences in temperature, combined with multiple parameters measured in the heat exchanger and other related parts of the plant. All of the measurements showed an accelerated fouling process, indicating a partial blockage in the heat exchanger which was the operational root cause. As a result of this combined alert, the heat exchanger was cleaned, and the partial blockage was removed. It was determined that while the heat exchanger had been partially blocked it had led to higher energy costs and increased fluid velocity, causing potential erosion problems; if it had not been fixed in time, it would have eventually led to a plant shutdown and lost production. 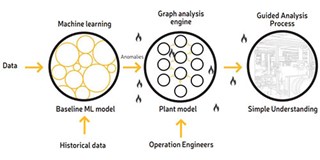 The good news is that there is a solution that can cope with undefined problems. Precognize SAM GUARD is unique in combining human domain knowledge with machine learning, enabling plant engineers to identify the causes and pinpoint solutions even for undefined, non-repeating problems. SAM GUARD draws on a plant domain model that takes into consideration the specific structure and behavior of the plant. This is rapidly created at the start of the engagement and it enhances the machine learning, guiding users to the right areas of the plant to identify potential issues that may never have occurred before. It can be easier to predict and thus prevent the defined problems, but the undefined ones occur much more frequently and can be a massive headache to plant owners and operators. Avoiding these unforeseen problems is the ultimate goal of every predictive analytics program in petrochemical and chemical plants and this adds much more value to the plant as a whole. With the help of SAM GUARD, plants can prevent these undefined, non-repeating problems.

Chen Linchevski, CEO, Precognize. Chen, a true believer in the ability of the industrial sector to transform itself and increase efficiency, took raw ideas and transformed them into promising companies. Throughout the execution Chen demonstrated true leadership and vision. Precognize, of which he’s CEO today, was nominated by the World Economic Forum as Tech Pioneer of 2018 and acquired by Samson Group. During his career, Chen worked with key industrial companies such as GE, BASF, Shell, and LG, specializing in the design and analysis of complex industrial systems. More info: www.precog.co 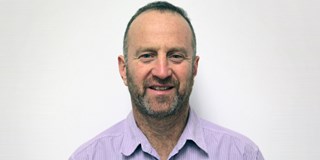