Until recently, heat exchanger design has been restricted broadly to two types, shell-and-tube and plate-and-frame. The manufacturing processes – welding, brazing or gasketing – are time-consuming and expensive. All this is changing, thanks to 3D-printing. This new technology has opened up heat exchangers to new designs, allowing them to be tailor-made for a given application.

Heat exchangers lie at the heart, indeed one could say are the heart or lungs, of most energy and process industries, and also refrigeration, air conditioning systems and car radiators (1). They allow transfer of heat from one medium to another, thereby ensuring that heating and cooling in process and energy industries can occur safely and efficiently. Typically there are two ‘loops’ or piping systems, each of which transports a fluid (liquid or gas) so that heat is conveyed from one to the other. If heat exchangers are the heart and lungs of a process, these fluids are the blood or air. 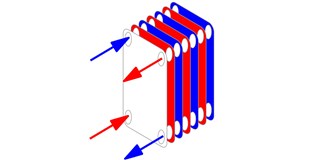 Until recently, heat exchanger manufacture followed a relatively predictable pattern. The two basic designs are shell-and-tube (S&T) and plate (plate-and-frame, or PHE); in addition, there are multiple subtypes of each, and also hybrid designs. S&T is by far the most common design: a tube or tube bundle is enclosed within a closed, cylindrical pressure vessel (shell). One fluid flows through the tube, the other around and between the tubes, within the shell. This classic design is the tried-and-tested solution for most applications in the energy and process industries, especially where high pressure prevails. Common applications and industries include oil refining, preheating, oil cooking/ cooling, heat recovery and steam generation.

PHEs consist of a bundle of thin, corrugated plates divided into pairs that are bolted, brazed or welded together. Each pair creates a channel through which one fluid flows, and between the pairs a second passage is created through which the other fluid flows. One important variant is the plate fin HE, where fins or spacers are inserted between the plates to allow more flow configurations and the flow of more than two fluid streams.

Sketch of a helical-coil heat exchanger, which consists
of a shell, core, and tubes. Design: Scott S. Haraburda.

This compact design is ideal when space is limited. It is better suited to low and medium pressures, where the counter-current flow can lead to energy savings. Common applications are cryogenic, furnace, and food and chemical processing. In recent years the market share of PHEs has increased compared with the S&T design.

Manufacturers have improved or modified these basic designs to make them more efficient. The S&T type underwent considerable modification in helical coil and spiral HEs, which allow economies of space. For example, the air-cooled HE (ACHE – also known as the fin fan HE) is much more complex than the S&T type. It was developed to allow ambient air, rather than water, to be used as the coolant. Concerns about water shortages have led to increased demand for this type. They are common in refining and chemical processing and in power generation, especially in the dry cooling towers of concentrated solar power stations. They consist, at the very least, of several tube bundles, usually made of aluminium, an air-moving device such as a fan and a plenum (enclosed space) to separate the bundles from the fan. Typically they are installed above ground so as to leave room for air flow and to save space. An especially important development is a hybrid combining features of the plate and shell-and-tube designs: the plate-and-shell HE (PSHX). In this design a plate pack is enclosed in an outer shell, so that the two flow paths are within both the plate pack and the shell. They are more leak-proof than other designs and are built to withstand higher pressures, higher heat transfer and higher operating temperatures. By dispensing with gaskets, baffles and supports the PSHX cuts down on failure rates and combines the best features of both designs: the compactness of PHEs and the high performance of S&Ts.

HEs can also be classified in many ways: design (as discussed in the main text), type of cooling used (air or water) and tube configuration (parallel, crossed, countercurrent or hybrid flow) and whether or not a phase change is involved (in condensers, steam converts into water; in evaporators, water converts to steam). Another important factor is the material of manufacture. Many HEs are made simply from aluminium or steel. However, those that operate under intense pressure or extreme heat conditions or where there are rapid temperature fluctuations require higher-grade metals. These conditions often require materials that can withstand high pressures, corrosion and heat, such as nickel alloys, superaustentics or titanium.

Non-steel alternatives include graphite, a type of carbon crystal.

The use of graphite, which dates from 1939, is currently growing very fast (2), though for the moment the material is expensive. The main advantages of graphite are resistance to ultra-corrosive chemicals, high thermal conductivity (leading to greater heat transfer efficiency) and good refractory and mechanical properties. This material is used mostly in the shell-and-tube type, on the inner side of the shell. Since graphite cannot be welded, specialized adhesives are used instead.

Another material of interest is graphene. At just one atom thick, it is the thinnest-known material, but about 200 times stronger than steel. One recent innovation has been the application of a graphene coating to promote dropwise condensation in order to avoid water films that impede heat transfer and condensation efficiency. It has been estimated that its use in power plants would increase efficiency by 2-3%, though its more frequent use will depend on lower prices.

Large graphite heat exchanger with a corrosive fluid
on process side only with carbon fibre
reinforcement Photo: GAB Neumann.

HE 3D-printed by Renishaw.