The commercial synthesis of urea takes place globally with hundreds of millions of tonnes produced each year. Its uses include nitrogen-release fertilizer in agriculture and chemical processes. Urea is also applied in vehicle manufacture, to combat nitrogen oxide emissions, and in medicine. Industrial producers of urea use a two-step process to synthesize it. The first is to combine ammonia and carbon dioxide at a high pressure of 140 bar (approximately 2030.5 PSI), and in a high temperature environment of around 183 °C (361.4 °F). This prompts a reaction that generates ammonium carbamate.
The ammonium carbamate is further processed so that it decomposes into urea and water. This process is always partial which means unconverted ammonium carbamate remains and must be removed from the urea solution, an aspect of the production that creates issues for manufacturers.
Previously, manufacturers have used pressure changes to decompose the unconverted product back into constituent parts or recycled the ammonium carbamate. Yet neither of these has proved successful. Stamicarbon, the innovation and license company of Maire Tecnimont, has a long track record of expertise and experience in designing urea plants including its critical equipment. Being pioneers in urea technology, the company introduced the CO2 stripping process. Inside high pressure (HP) strippers, the operating environments for the stripper’s heat exchanger tubes are extremely challenging and have been found to damage and corrode even the most robust alloys.

Highly corrosive environment
During this process a stripper uses carbon dioxide to separate free ammonia from the effluent, causing unconverted ammonium carbamate to break down. The HP CO2 stripping process has beneficial effects on the economics and efficiency of urea production. While the HP CO2 stripping process revolutionized certain aspects of the urea making process, it has also created complications. The operating environments within HP strippers are extremely hostile for most stainless steels. Heat exchanger tubes must withstand the hottest part of any urea producing system, and the combination of sustained high temperatures and pressures, with the presence of corrosive substances, make corrosion a significant problem.
Corrosion compromises equipment functions, creates constant maintenance demands – with the associated costs and downtime – and causes component failure. All of which result in severe consequences for plant efficiency, revenues and safety. As the originator of the HP CO2 stripping process, Stamicarbon has experimented with the feeding of oxygen or air into systems to promote passivation when using austenitic stainless steels. This was the background to its partnership with Sandvik Materials Technology and the companies embarked on working together to produce an austenitic stainless steel that is optimized for urea production.

Enter Safurex
A key development occurred in 1996 when Safurex® (UNS S32906) came to market. The next result of Sandvik and Stamicarbon’s partnership was a duplex stainless steel optimized specifically for use in the Stamicarbon urea process. Its characteristics are superior to conventional stainless steels used in urea production, such as high resistance to corrosion in environments with low oxygen.
The material proved very successful, to the extent that active corrosion of Safurex has never been noted in urea equipment despite the presence or absence of air for passivation. The grade is found to be virtually immune to condensation corrosion, crevice corrosion, chloride-induced stress corrosion cracking (SCC) and strain-induced intergranular cracking (SIIC).
The thermal expansion properties of Safurex and its strength, are close to the levels seen in carbon steel. These factors can combine to generate substantial savings for operators in terms of weight, even in high temperature piping. Safurex shows corrosion at a rate below 0.01 mm/year, which is barely detectable with standard testing equipment.
While the new grade exhibited impressive anticorrosion properties, these characteristics were sometimes found to be dependent on temperature. Consequently, higher rates of corrosion in the region of 0.07 and 0.09 mm/year were observed in the hottest part of urea production systems, namely the HP stripper. These findings prompted Sandvik and Stamicarbon to work towards making a stainless steel that was even more resilient in urea applications.
The latest result is Safurex® Star an advanced duplex stainless steel that is capable of enhanced passive corrosion resistance in even the most demanding aspects of urea production. The grade is designed specifically for use in HP stripper heat exchanger tubes.

The next step
From the outset Stamicarbon and Sandvik sought to develop a stainless steel optimized to resist passive corrosion in the presence of ammonium carbamate, the key corrosive agent that is generated in urea manufacture and dealt with in the HP stripper. The R&D program included the screening of alloys in ammonium carbamate solution. This was applied alongside more conventional techniques, such as the Huey test (ATM A262 practice C) and the Streicher test (ASTM A262 practice B). These testing techniques meant that the new alloy would have passed some of the most demanding screening processes ever applied.
For the first stage of assessment, a broad range of alloys were produced and the approach to these grades was to vary the chemical compositions.
Two restrictions were applied for the compositions: each alloy had to be a duplex stainless steel (50 per cent austenite and 50 per cent ferrite) and have a high chromium (Cr) content. In total, 16 new alloys were produced in forms that resembled commercial tubing – i.e. hot worked, cold worked and annealed. Each alloy was assigned a number and targets were set with regards to weldability and structural stability.
All of the alloys were screened in ammonium carbamate and then assessed for their ability to resist corrosion in this medium. A suitably-designed autoclave was used for the screening, see Figure 1. 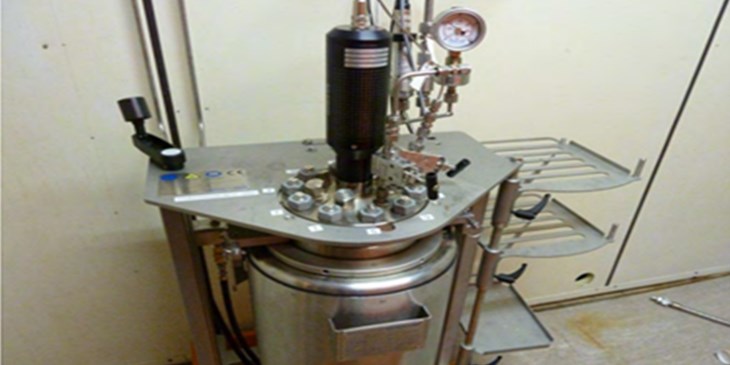 The autoclave was rated at maximum pressure of 300 bar and a top temperature of 250 °C (482 °F) and had a magnetic agitator, so that the liquid was constantly renewed at the surface of each alloy and the environment was homogenous for all specimens. In order to truly replicate the concentration of ammonium carbamate likely to occur in an HP stripper at the same temperature, the quantity of chemicals was loaded into the autoclave under static conditions.
The materials also underwent the Huey and Streicher corrosion tests, and their mechanical properties were quantified through tensile, hardness and impact testing processes.
Temperature profile experiments were then carried out to establish the structural stability of each alloy, including the sensitivity of the intermetallic (sigma) phase. This is when precipitation can occur within the metallurgy of duplex steels, as determined by the possible formation of intermetallic phases. Even in small amounts, the phase can seriously impair a steel’s plasticity or corrosion resistance.
Further tests assessed the chromium nitride formation in each steel and autogenous Tungsten Inert Gas (TIG) welding trials were used to assess weldability. Next, a more straightforward production route was examined.

Tensile testing at room temperature and Vickers hardness testing was used to establish the grades’ mechanical properties. All alloys showed good yield strength, with alloys 106 and 113 being comparable with Safurex. The results are shown in Figure 3.

There is usually a compromise required between corrosion resistance and structural stability. In this case, because the objective was to produce a material for use solely in heat exchanger tubes, the requirement for stability was reduced and need for corrosion resistance was increased.
Chromium nitrides can easily form in duplex stainless steels during welding, so the new Safurex Star had to out-perform Safurex in this respect.
Dilatometry (a thermo-analytical method for measuring the shrinkage or expansion of materials over a controlled temperature regime) was used to study the structural stability of the experimental alloys. Alloys 105, 106 and 113 all performed best in terms of chromium nitride formation, and all performed better than standard Safurex.
Impact strength was assessed via a Charpy test, in which alloys 106 and 113 showed acceptable performance above 100 joules and at both temperatures, see Figure 4.

Following consideration of all the outcomes, alloy 106 was selected to become the new Safurex Star (UNS S33007).

The result: Safurex Star
Specifically, Safurex Star is a 30Cr7Ni3Mo duplex stainless steel that has been designed for exclusive use as heat exchanger tubes within HP strippers in urea production. The material is a specialty grade, intended for use only in the most extreme and demanding conditions where corrosion resistant material has shown signs of some passive corrosion.
The passive corrosion rates of Safurex Star are 10–20 per cent less than those of Safurex, therefore the material looks set to substantially extend the lifetime of HP strippers.