Collar bolts are used in removable bundle heat exchangers to hold the bundle in place and remove the channel without interrupting or breaking the seal between the tubesheet and the shell. This article examines recent specifications on the use of collar bolts and concludes with a consideration of the pros and cons in their application. 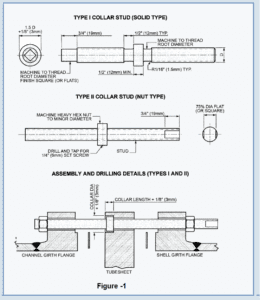 In the new, tenth edition of TEMA, which was published in 2019, recommendations have been added under part RCB-11.8 for the use of collar bolts in removable bundles with a B-type bonnet. These are summarized below and, as per the recommended configuration, shown in Fig. 1. When specified by the purchaser, collar studs can be used on units with removable tube bundles. Collar studs are recommended for B-type bonnets. The OD of the stationary tubesheet should match the mating flange OD and should be through-bolted. Every fourth stud in the bolt circle (with a minimum of four) should be a collar type I for type II as shown in Fig. 1.
Collar bolts are only used to maintain the gasket integrity and position when the channel is removed and torqued prior to adding pressure.
As an alternative to collar studs, every fourth bolt hole in the tubesheet can be drilled and tapped to the size of the stud bolt. The studs in the threaded holes should be double nutted on the shell side or provided with machined flats to allow for the tube side nut without rotating the stud.
In API 660, Para 7.5.2.4, a full diameter stationary tubesheet should be provided for removable tube bundle exchangers with bonnets (see TEMA, Fig. N-1.2, type B stationary head, quoted in Fig. 2). The tubesheet should be provided with collar studs or tapped tubesheet holes for a minimum of 25% of the bolts (with a minimum of four). It should be possible to hrostatically test the tubesheet design of the shell side when the bonnet has been removed and all the bolts have been installed.
If collar bolts or drilled and tapped holes are used, then at least four should be permitted and their location should be identified on the drawings and by stamped markings on the OD of the tubesheet. 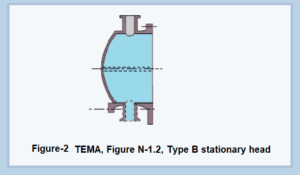 In PIP VEFV1100M Vessel/S&T Heat Exchanger Standard Details, a standard configuration for the collar bolts dimensions is provided as shown in Fig. 3.
Surface condensers are designed to the requirements of the Heat Exchange Institute (HEI) per the typical configuration shown in Fig. 4, in which both the tubesheet is fixed and the gasket between the tubesheet and shell flanges cannot be attended to without the removal of one of the tubesheets.
The following warning is quoted from the manual of one of the most famous and reputable surface condenser manufacturers in the world:
“It is important not to break the seal between tubesheet and shell flange. The tubes are expanded into each tubesheet holding them firmly in place, and the shell seal must not be replaced without retubing the entire condenser. To prevent breaking the joint, it is important that all the nuts are removed from the waterbox flange side and not from the shell flange side. Do not loosen or remove the stake studs and double nuts on the shell side.” A leak on the shell side would have a great impact at the plant as it would break the vacuum. The use of collar bolts in such a configuration is a must.
Despite the illustrated advantages of using collar bolts, there is debate in the industry about disadvantages in their use as well – namely that they might be might bring about more trouble from their inclusion instead of enhancing the maintainability of the heat exchanger. In the following section, their main pros and cons are summarized.

Pros for the use of collar bolts

The main objective and advantage in using collar bolts is to enhance maintainability, considering the fact that each time the channel is removed, the bundle should be removed for replacing the gasket between the tubesheet and the shell to avoid leakage after pressurizing the exchanger. The replacement of the bundle gasket is time consuming and increases Mean Time To Repair/Restore (MTTR).

Cons for the use of the collar bolts

(a) An alternative viewpoint on the use of collar bolts is that it is not mandatory to remove the bundle if the channel is removed. This opinion is based on the experience of using kamprofile gaskets with graphite facing and the application of initial correct stress and following the use of the recommended torque to reach the desired gasket stress.
(b) In cases where the use of tapped holes results in bolts that stick, the amount of time needed to attend to machining and the replacement of bolts would be time consuming and might be beyond the feasible limits of the maintenance crew for this task.
(c) Inadequate marking or stamping of the collar bolts might mislead the maintenance crew, and collar bolts might be removed by mistake.
(d) There might be relative higher cost accruing to the larger tubesheet size and the aching required for the bolt holes in the tubesheet.

Baher Elsheikh is a Mechanical Engineer at SABIC. He has seventeen years of experience in the engineering, reliability, construction, commissioning and inspection management of pressure equipment, piping systems, fired heaters, and power boilers. 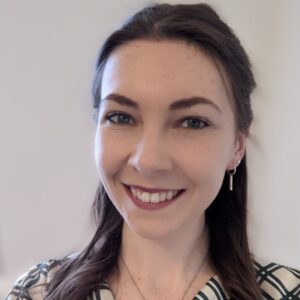 This Featured Story was first published in Heat Exchanger World Magazine in May 2020. To read more Featured Stories and many other articles, subscribe to our print magazine.