Within the class of compact heat exchanger, the sub-class of high efficiency CHEs is generally characterized by high film coefficients and low fouling factors that both contribute to higher overall U values. While these attributes alone tend to make the CHEs smaller in size than conventional shell-and-tube and other ‘longitudinal’ heat exchangers, the use of close channel spacings also allows this sub-class to get more heat transfer area into a given footprint and a given volume. 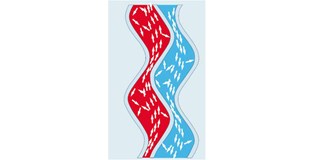 Fig. 2. The corrugated plates have shallow
depths, which create a turbulent
path for fluid flow.

The corrugated plates have rather shallow pressing depths (2–4 mm and, in special designs, up to 16 mm) that create a turbulent path for fluid flow (Fig. 2), generating high wallshear stress, often at relatively low channel velocities.
Wall shear stress is an important factor in mitigating fouling. The plate and frame heat exchanger has been shown to demonstrate much higher heat transfer coefficients than conventional shell and tube exchangers and has been discussed before (see ‘Plate Heat Exchangers: Avoiding Common Misconceptions and Improving Heat Revovery,’ Chem. Eng., February 2009, pp. 40–47). 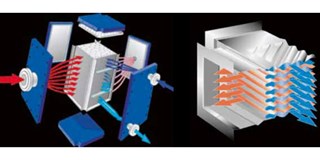 Four heavy steel panels surround the plate pack. Each pass is separated from the adjacent passes by a baffle, which forces the fluid to turn between the plate pack and the panel. As in the plate type heat exchanger discussed previously, the corrugated plates in the fluted-plate block heat exchanger create narrow channels for each fluid. These narrow channels generate turbulence, resulting in high film coefficients and high wall-shear stress, typical of corrugated plates with narrow channel spacings. Both the plate type and the fluted-plate block heat exchanger are characterized by small residence times due to their relatively low holdup volumes. 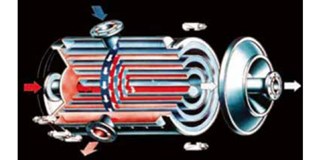 2. Spiral heat exchangers
The third type of heat exchanger in the class of CHEs to be discussed is the spiral heat exchanger. Unlike the plate-type heat exchanger and the fluted-plate block heat exchanger, the heat transfer surfaces of the spiral heat exchanger are not corrugated plates. Instead, the surfaces are sheets of steel (or any alloy that can be cold-worked and welded) wound around a center tube, which is then wound so that two separate, concentric channels are formed (Fig. 4).
Uniform spacing between the wound passages is maintained along the length of the spiral winding by spacer studs that are welded to one of the sheets. Most manufacturers offer spacings of 6–25 mm. Both of the fluid flow channels are closed by alternate channels welded at each side of the spiral sheet.
While the spiral can be configured into a number of flow patterns that result in spiral flow on both sides, spiral flow on one side and cross-flow on the other side, or a combination of spiral flow and cross flow (for condensing and subsequent sub-cooling), this article discusses those spiral configurations where one or both fluids are in spiral flow, since this is the design most often used in liquid-liquid applications. 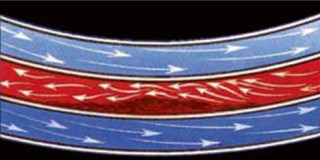 Fig. 5. In spiral heat exchangers, the curved passage
ensures that cleaning place fluid has the highest
velocity at the point of fouling.

The spiral heat exchanger does not contain the parallel flow passages found in the corrugated plate types discussed above nor in the tube channels of a shell and tube. Instead, the spiral has a unique self-scrubbing feature due to the fact that the fluid (or both fluids) are in a single flow passage. That is, the fluid, upon entering the spiral heat exchanger, does not have the possibility of dividing up into a number of parallel flow paths as it can in the plate heat exchanger, fluted-plate block heat exchanger or tube bundle of a shell-and- tube heat exchanger.
Once the fluid enters the spiral channel, it must continue through that same cross-sectional area for flow until it exits the heat exchanger. As a result of this continuous, curving passage for flow, any solids that build up in the channel constrict the cross-sectional area for flow at that point, and as long as there is enough dead head in the pump feeding the fluid through that channel, the local velocity at the point of build-up increases as the local cross-sectional area decreases.
The self-scrubbing feature is most effective, especially due to sedimentation of particulate matter, when the axis of the spiral channel is horizontal. In this configuration, the spiral is especially effective for handling fluids with high concentrations of suspended solids. In a spiral heat exchanger, both fluids are usually considered to be in nearly pure countercurrent flow.