The fouling factors, which are used in the design of heat exchangers are normally specified by the client based on his experience of running his plant, or on processes to simulate dirt accumulation on the heat transfer surfaces. If this fouling is not restricted to adequate levels then it can totally negate any benefits generated by skillful design.

^ Fouling substances on the tube surfaces of the heat exchanger 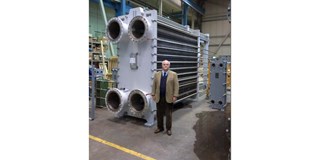 The fouling factor represents the theoretical resistance to the heat flow due to the build-up of a layer of dirt or other fouling substances on the tube surfaces of the heat exchanger. These dirt levels are often played down by the end user in an attempt to minimize the frequency of cleaning. In reality, however, lead to an increased cleaning frequency of the tubes, if the latter have been chosen badly. Fouling mechanisms vary with the application but can be broadly classified into four common and readily identifiable types.

Chemical fouling takes place when chemical changes within the fluid cause a layer of fouling to be deposited on to the tube surface. A common example of this phenomenon is the sealing caused in a kettle or boiler as a result of ‘hardness’ salts depositing on to the heating elements as the solubility of the salts reduce with increasing temperature. This sort of phenomenon is outside the control of the heat exchanger designer but can be minimized by careful control of the tube wall temperature, which is in contact with the fluid. When this type of fouling occurs it must be removed by either chemical treatment or mechanical de-sealing processes (wire brushes or even drills to remove the scale, or sometimes even through high-pressure water jets). 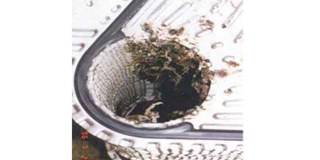 Biological fouling is caused by the growth of organisms within the fluid, which deposit on to the surfaces of the heat exchanger. This type of fouling is once again outside the direct control of the heat exchanger designer but can be influenced by the choice of materials as some, notably non-ferrous brasses, are poisonous to certain organisms. When this type of fouling occurs it can normally be removed by either chemical treatment or mechanical brushing processes.
Deposition fouling

Deposition fouling occurs when particles contained within the fluid settle out on to the surface when the fluid velocity falls below a critical level. This phenomenon can be largely controlled by the heat exchanger designer as the critical velocity for any fluid particle combination can be calculated. This allows a design to be developed with minimum velocity levels that are higher than the critical level. Mounting the heat exchanger vertically can also minimize the effect as gravity tends to pull the particles out of the heat exchanger, away from the heat transfer surface even at low velocity levels. When this type of fouling occurs it is normally removed by mechanical brushing processes. 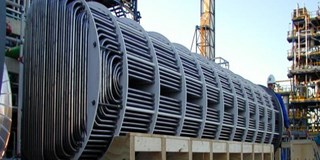 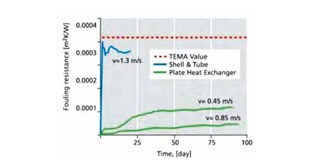 Fouling inside a heat exchanger can be reduced by:

I have my own personal experience with regards to this fouling factor discussion. Working for a large oil & gas EPC in Italy, I was told to design a heat exchanger with standard fouling factors for a monoethanolamine gas sweetening job despite my argumentation to the contrary. After installation, I received a phone call to inform me that the unit was not performing according to specifications. I suggested opening up the plate heat exchanger and taking away 50% of the plates and then restarting. After this the performance was perfect.