Advanced nuclear technologies (ANTs) such as small modular reactors (SMRs) and advanced modular reactors (AMRs) have the potential to support decarbonization beyond just supplying low-carbon electricity. However, their higher operating temperatures also mean that in order to successfully exploit these broader uses of ANTs, novel heat management and extraction technologies will be necessary. One very promising technology which can offer a step-change in the performance of thermo-fluid systems is fluid topology optimization (FTO or TO).

In this project, TO was used to generatively design a heat exchanger which can be used downstream of a high-temperature gas reactor for hydrogen cogeneration.
The TOffee generative design software was used to create two different heat exchanger designs – one in cross-flow and one in counter-flow.
The performance of these heat exchangers was estimated using a high-fidelity conjugate heat transfer analysis method which models both the fluid flow and heat transfer through the solid parts of the heat exchanger. In these simulations, the working fluids were helium/helium, and the heat exchanger material was a high-temperature nickel alloy.
The results of these simulations showed that the performance of the TO-designed PCHX was quantifiably better than traditional designs, with up to 8.5% increased heat transfer at the cost of only 4% increased pressure losses. 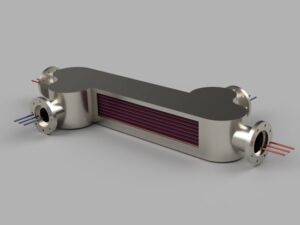 The application chosen for this design was a heat exchanger for hydrogen cogeneration downstream of a high-temperature gas reactor’s main loop. These heat exchangers must be able to handle very high temperature and high pressure flows of gasses such as carbon dioxide or helium.
Due to the publication of data from experimental reactors (Kunitomi et al.), such as the JAEA gas reactor (HTTR), the pressure and heat transfer requirements for these heat exchangers are well known.
In particular, we chose to design a printed circuit heat exchanger design (see Figure 1: Printed circuit heat exchanger designs).
PCHXs are formed with two media (hot and cold) on opposite sides of a diffusion bonded plate. The flow patterns for each of the fluids are optimized for the specific heat transfer and pressure loss requirements. Each plate is then stacked into a sandwich and diffusion bonded together. In addition to diffusion bonding, TOffeeAM has in the past created concept designs for PCHX which can be manufactured using additive manufacturing techniques.

We used the TOffee cloud platform to optimize the hot and cold layers of a printed circuit heat exchanger (Figure 2). As inputs, TOffee takes a design domain and fluid boundary conditions (flow rates, pressures, and temperatures). In addition to these two physical inputs, the user also specifies the optimization parameters: weights for each of the two objective functions (heat transfer and pressure loss).
The ratio of these weights tells the optimizer how exactly to prioritize the competing objectives of maximizing pressure loss while minimizing heat transfer.
One of the advantages of TOffee is the ease (and hence speed) at which the user can create new optimization jobs. This, combined with the relative speed of the optimization process itself (only a few hours per job) means it is easy for the user to quickly iterate through designs. To illustrate this point, for the current case, we generated two different heat exchanger designs – one in counterflow and one in crossflow. Both designs only took a few hours to generate.

After generating the topology optimized designs with TOffee, we performed high fidelity conjugate heat transfer (CHT) simulations to calculate their performance.
A CHT simulation couples a computational fluid dynamics (CFD) simulation, which models the flow and the heat transfer in the two-fluid media with a heat conduction simulation to model the heat transfer in the solid. In this way, the performance of the heat exchanger can be predicted using a minimum of assumptions and the maximum of high-fidelity simulations.
In addition to performing analyses of the performance of the topology-optimized heat exchanger, we performed CHT analyses of conventional PCHX designs.
We judged that it was necessary to perform these expensive simulations instead of using one of the many correlations available in the scientific literature because the strong variability of results in the literature means that the applicability of the correlations is extremely limited. The extra simulation of the conventional design is the best way of providing a like-for-like comparison of results. The conventional design chosen to provide comparisons is a staggered-aerofoil design like that shown in Figure 4.

Advanced nuclear technologies such as small modular reactors and advanced modular reactors have the potential to support decarbonization beyond just supplying low-carbon electricity.
Their higher operating temperatures mean that there is a significant opportunity to exploit downstream cogeneration activities such as hydrogen generation. However, their higher operating temperatures also mean that in order to successfully exploit these broader uses of ANTs, novel heat management and extraction technologies will be necessary.
The goal of this project was to use topology optimization (TO) to generatively design a printed circuit heat exchanger which can be used downstream of a high-temperature gas reactor for hydrogen cogeneration.

The TOffee generative design software was used to create two different PCHX designs – one in cross-flow and one in counter-flow. The performance of these novel PCHX designs was estimated using a high-fidelity conjugate heat transfer analysis method which models both the fluid flow and heat transfer through the solid parts of the heat exchanger.
In these simulations, the working fluids were helium/helium, and the heat exchanger material was a high-temperature nickel alloy. The performance of the TO-designed heat exchangers was compared to a con-ventional PCHX design like the ones used in the JAEA HTTR reactor.
We showed that across both laminar and turbulent flow conditions the performance of the TO-designed PCHX was quantifiably better than the traditional design, with up to 8.5% increased heat transfer at the cost of only 4% increased pressure losses.
These performance gains come with negligible increases in temperature gradients and hence thermal stresses. Furthermore, the TO-designed PCHX can be manufactured using traditional PCHX manufacturing techniques, removing the need for complex qualification pathways that may be necessary for extremely complex additively manufactured components.

About the company
TOffeeam is a spin-out company from Imperial College London that develops cloud-based multi-physics software that automates the design process to maximize the performance of thermo-fluid components based on multi-objective optimization.